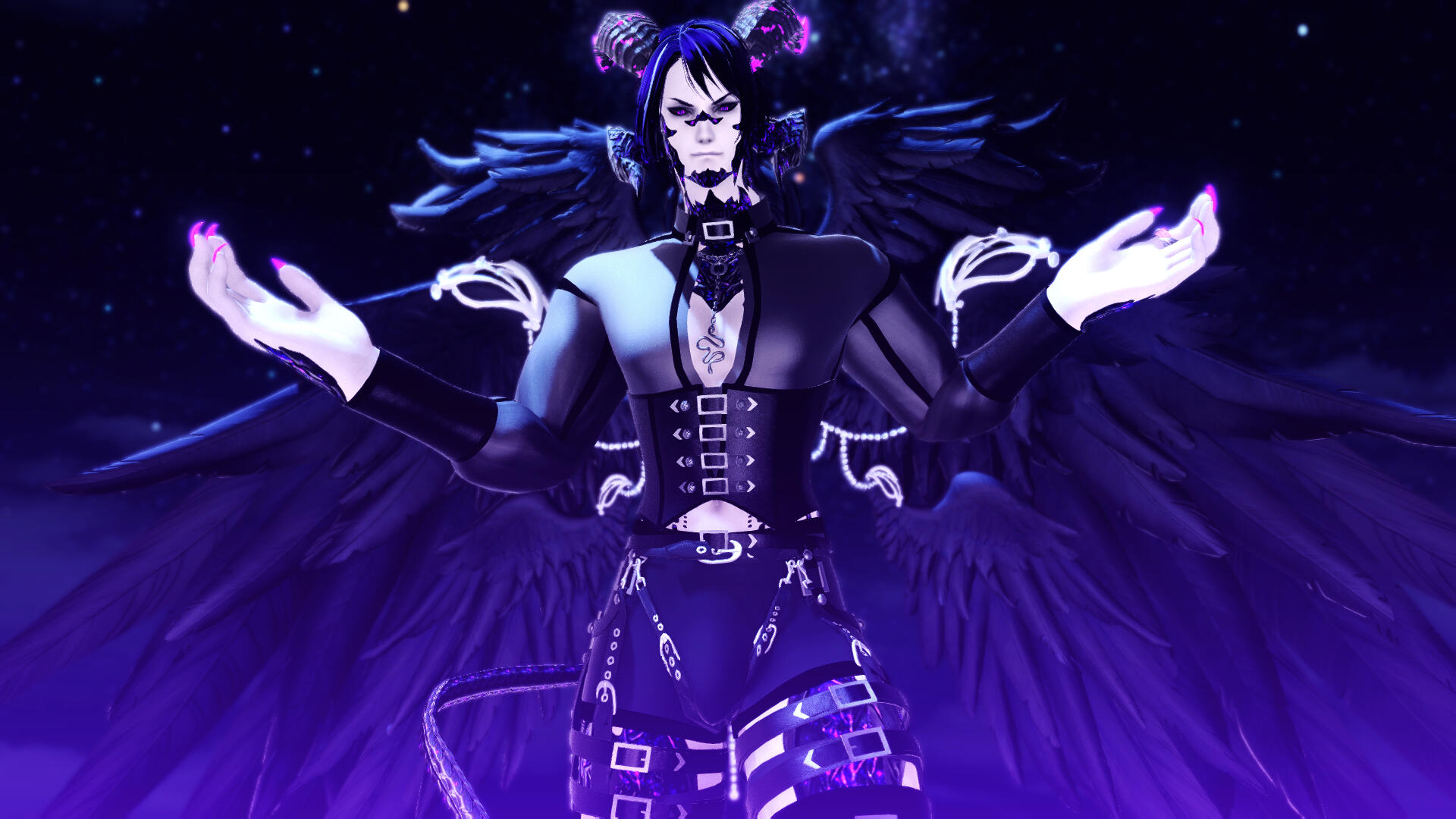 Have you ever yearned to go
Past the world you think you know?

This carrd contains spoilers for Shadowbringers/Endwalkers and dark content because of Andras' lore. Please do not proceed if you have not completed Shadowbringers and wish to avoid spoilers, or if you cannot handle mature themes such as body mutilation, murder, or abuse/neglect. 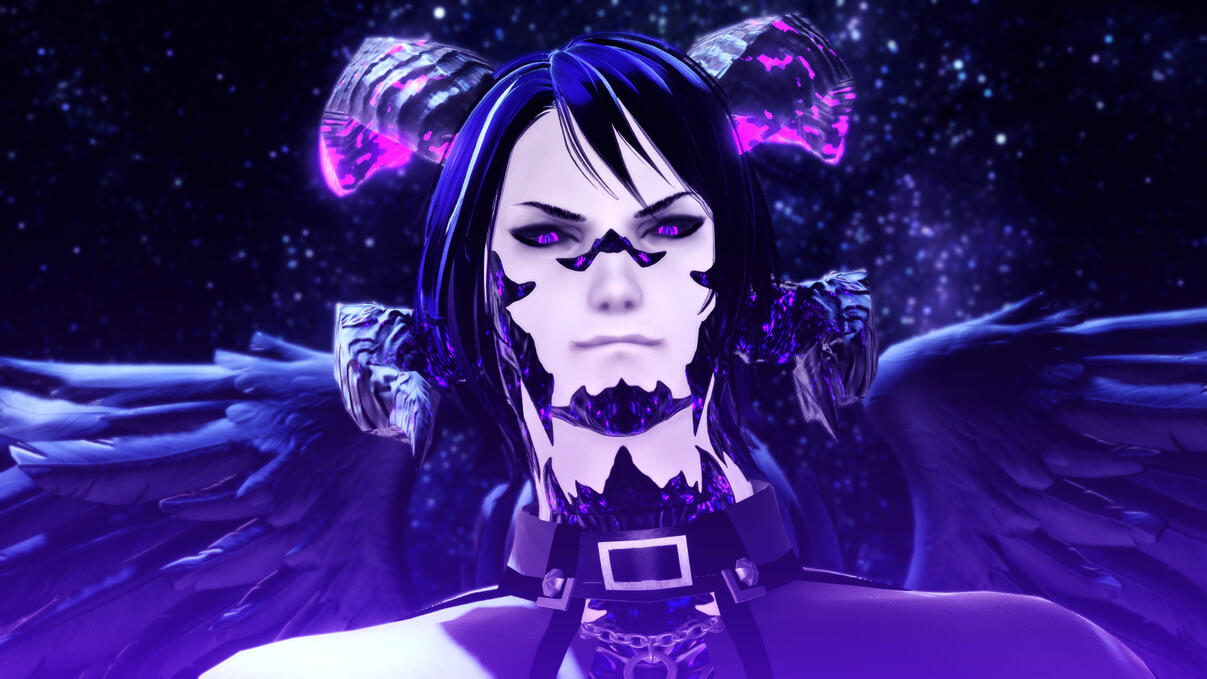 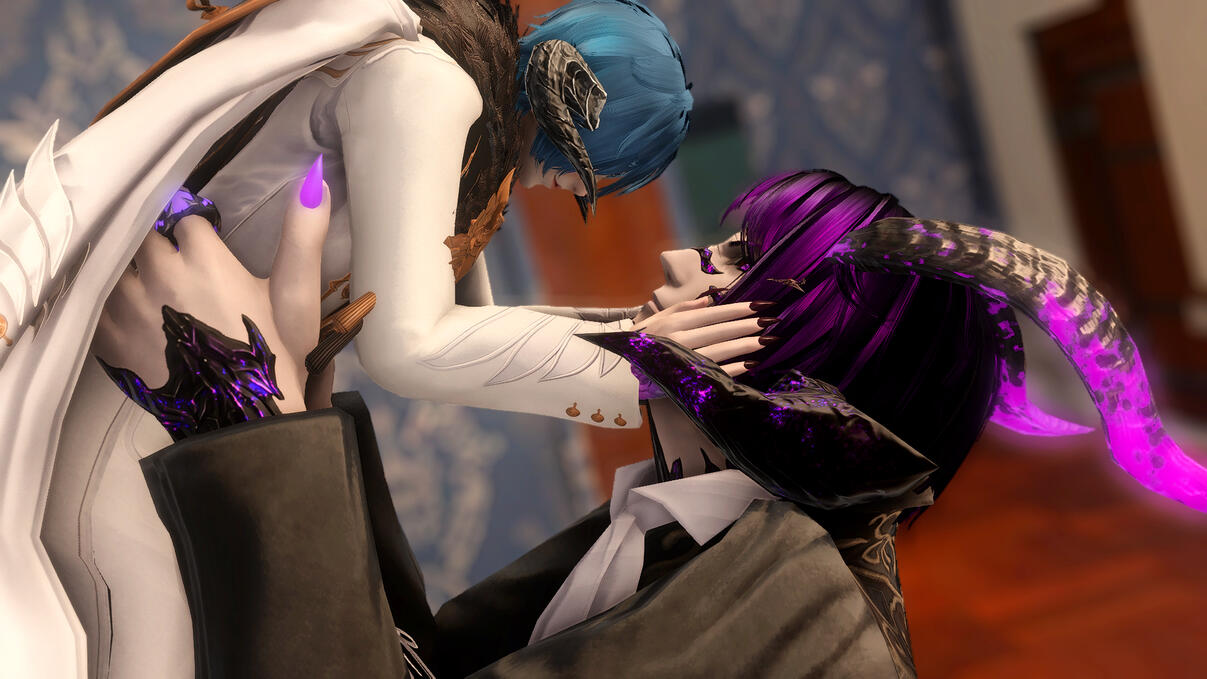 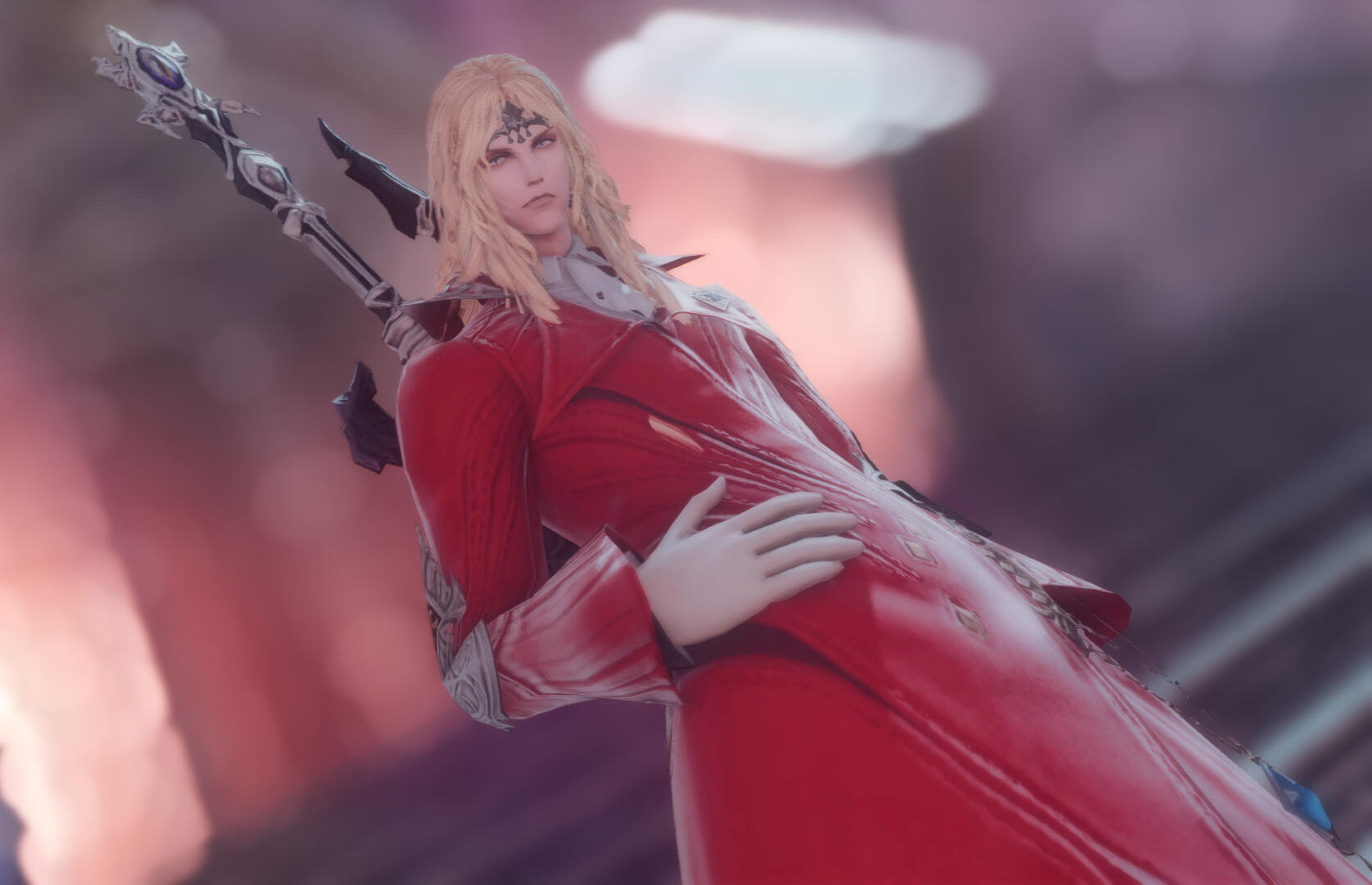 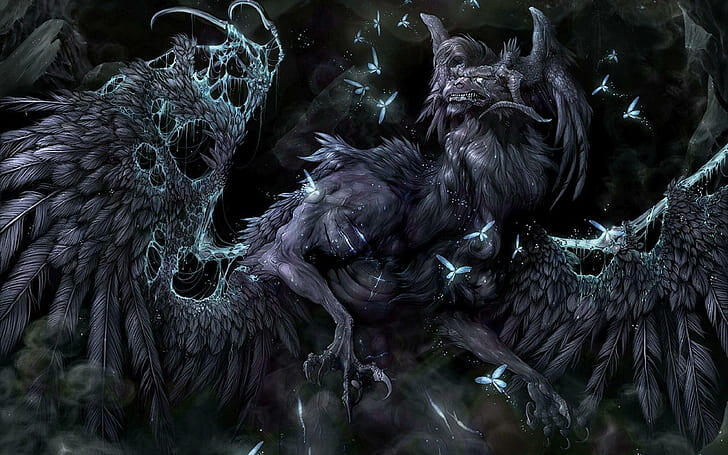 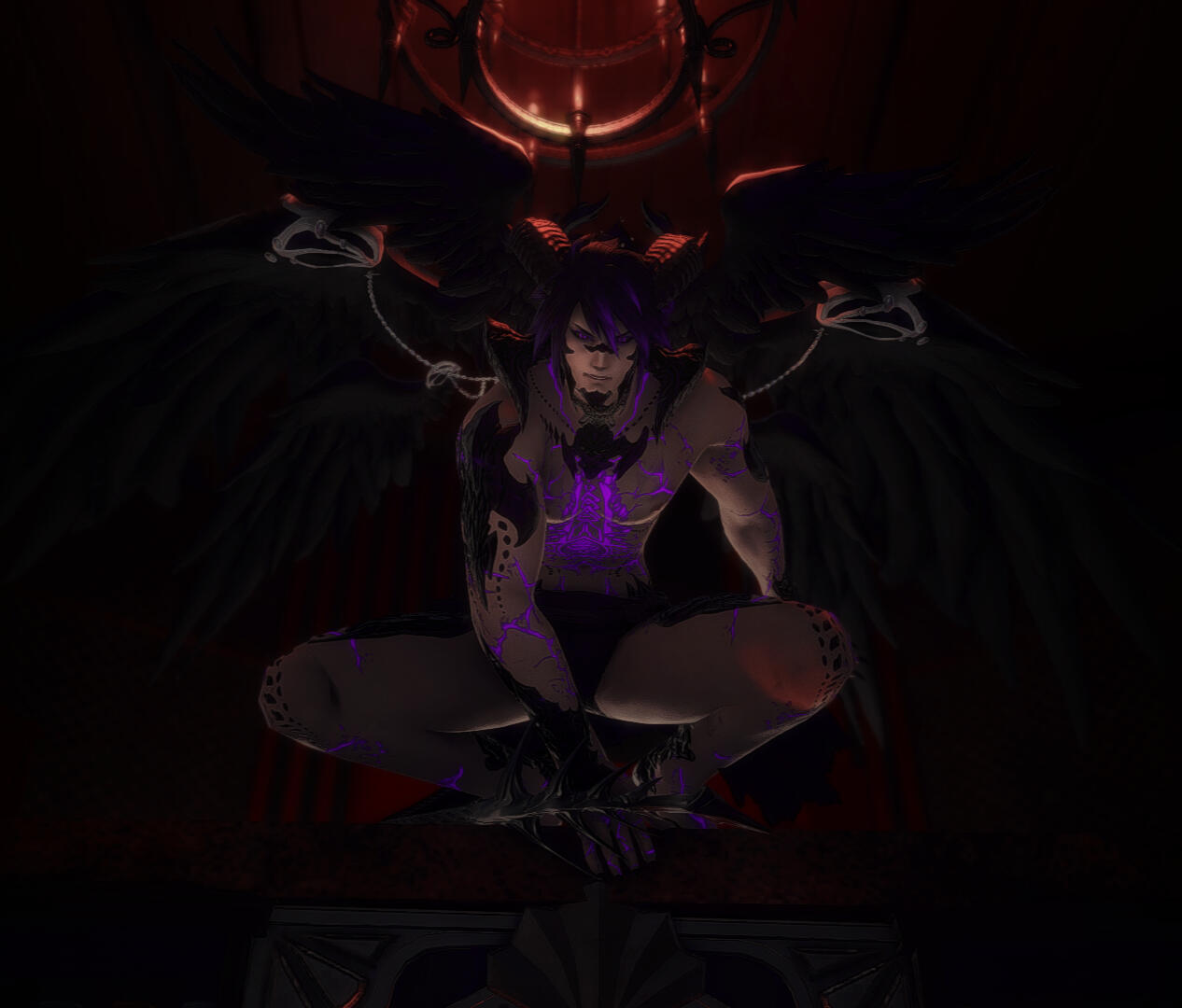 On the 13th Shard

Much like all voidsent, Andras spent his human life on the 13th Shard until it succumbed to darkness and became the Void. Born as Andreas Alarie in a rural town to successful botanists, his childhood was a comfortable one. The townsfolk quickly noted the elezen/elf boy's beauty and sharp wits. Golden locks framed his fair face like a halo, reminding many of wheat during a bountiful harvest - and certainly Andreas's most defining feature.Yet for all the luxuries they could offer, his parents were too engrossed in their work to focus on raising a child. This led Andreas to search for ways to gain the attention of any who would offer it, for better and (often) for worse. The status of his parents as co-leaders of the Botanists' Guild, combined with his beauty, meant he was forgiven when others would be punished. From bullying other children in the fields to acting out in classes, Andreas forced anyone he could to acknowledge him. His parents, in their permissiveness, never reprimanded Andreas.
With time, a problematic child grew into an unpredictable teen who defied any authority figure, including the church. His restless soul hungered for something more than a lax life in his quaint town, and the elezen teen would argue about Halone with priests then purposely act against what they deemed "Her will". His coveted features once more worked in Andreas's favor. Men and women would fawn over him, lured into his bed by empty promises and sweet nothings that led to broken hearts and fatherless children.All the while, parents thought their beautiful boy could do no wrong - even as he began to resent them. Each journey to the High Cathedral forced Andreas to endure the disgusted gazes from nobility, the realization he was no longer the top rung, and the sight of fine folk who wouldn't even give him the time of day. Gossip quickly revealed how easily a noble could have torrid affairs with anyone they wished. Why had he been born an Alarie - just a botanist - when he deserved to have anyone he desired without consequences? There was only one other way to achieve such a feat: become an adventure. And so Andreas did.

Regaled by the stories of other adventurers in the pubs and markets, Andreas decided that he would follow suit. Nothing was left for him at home save for overly affectionate parents, annoying priests who blamed his 'sinful' actions for any tragedy befalling their people, and those he'd already broken the hearts of. Not a single goodbye was given before the lonesome elf set out for the road with nothing but the clothes on his back and a sword in hand. The only training Andreas had ever received was with a hatchet and scythe, but such weapons left his body toned and muscular. Where he'd failed academics out of boredom with the work, the elf excelled with the blade early on. What was the difference between chopping off a branch or slicing wheat to doing the same to a monster's body and limbs?Now a dashing young adult, Andreas fell in with a group of adventurers that acted more like mercenaries. Like him, they did not take up the title for the sake of helping the realm. Slaying monsters and rescuing loved ones from beast tribes came at a cost: booze, gil, clothes, and for Andreas: infatuated townsfolk to sleep with. Those the elezen favored the most would get more of his time. Perhaps he might even stay several moons while the rest of the band moved on. Then talks of marriage and children would arise, the latter often due to unexpected pregnancy. By the next sunrise, Andreas would vanish without a trace. By the time angry, betrayed townsfolk hunted him down, the adventurer would already be malms away.Just as so many adventurers did for their own reasons, Andreas and his band answered the call for aid from the Bringer of Light and their allies. But all were ill-prepared for the battle that led the Thirteenth to become the Void. Andreas was one of millions to face a fate worse than death during the Flood of Darkness. His aether became overly aspected to umbral lightning. Such an imbalance caused his very form to warp and distort. Bones broke and flesh sundered as his very soul changed.The creature left in the wake of the Flood of Darkness was no longer Andreas, but a voidsent driven by its hunger for aether and controlled by its foremost vice: lust. He was an incubus. The dark, shattered remains of the Thirteenth fell into chaos as every voidsent fought for power and aether uniformly. Yet the elezen's quick wits were perhaps the only part of him unchanged. While others became mindless beasts, Andreas turned into a cold and calculated killer that made the former easy prey. Still, as millenia passed by and more voidsent died, the incubus sought opportunities to cross into other worlds for fresh aether.Such 'outings' were short-lived. Given his power, calling Andreas forth and offering a strong enough vessel were challenges few could overcome. Texts quickly began recording how the incubus would lure summoners out from the safe circles created for the ritual only to murder them. Over time, they shortened his eloquent and lengthy name to 'Andras'. Massacre after massacre unfolded, and the aether was all his. So powerful was Andras that his summoning was often forbidden because of the associated risks. The rare successes saw previously peaceful leaders set their armies upon each other in brutal bloodshed for reasons unknown. Receivers of the summoners' ire were found mutilated inside and out in their beds - such scenes so grotesque that few could stomach them. Violence and lust: the sole will of Andras... until a young Au Ra called him forth on the brink of death.

Tabin Himaa and his brother Tarkhan Himaa were offered as sacrifices by cultists seeking to open a portal for Andras to enter the Source through. Their goal was to use the voidsent to cause infighting among the great Oronir tribe before the annual Naadam. They completed the ritual in a graveyard of warriors to offer ample vessels for Andras to choose from as he crossed the threshold into their world. Tarkhan was mutilated and then stabbed through the heart as their first sacrifice. Tabin's treatment pursued. But as the boy faced imminent death, a portal opened into the Void.The incubus heeded the call from his World of Darkness, but answered only to one: Tabin Himaa. The boy's lust for vengeance and violence was a prayer to the demon from one who'd long forgotten salvation. At his behest, Andras slaughtered the cultists as he had so many before them. Yet when he turned to take the boy's aether, Tabin surprised him by offering a choice: live in the Source and feed on him while the boy hunted down who sent the cultists after him and his brother. In return, Tabin made three demands.1. Never lie to me.
2. Obey my commands without question.
3. Protect me without betrayal until we bring my revenge to fruition.Full of wanderlust even as an incubus, Andras eagerly accepted. He believed the boy would be an easy target to manipulate. Time proved him wrong. Cycles went by and the pair solved case after case as private investigators - daring to go where the authorities and nobility of polite society would not to fight what they could not. Eventually, both found themselves employed at The Second Circle.All the while, Andras served as Tabin's servant. In the beginning, he would use every opportunity to convince the young xaela to forego his revenge. This would render the condition of the third demand fulfilled and thus allow Andras to betray Tabin by consuming all of his aether and killing him. Every time, Tabin declined.More cycles passed until the two knew not what it was like to live without the other's presence. Tabin grew and matured while Andras remained unchanged. Now aged twenty cycles, the lamb has fallen for the lion. Tabin yearns for Andras' affection and love, even if the latter claims he cannot experience such things. Yet fateful meetings with other mortals have thawed the voidsent's apathy. How will this affect him as his duality with Tabin continues? 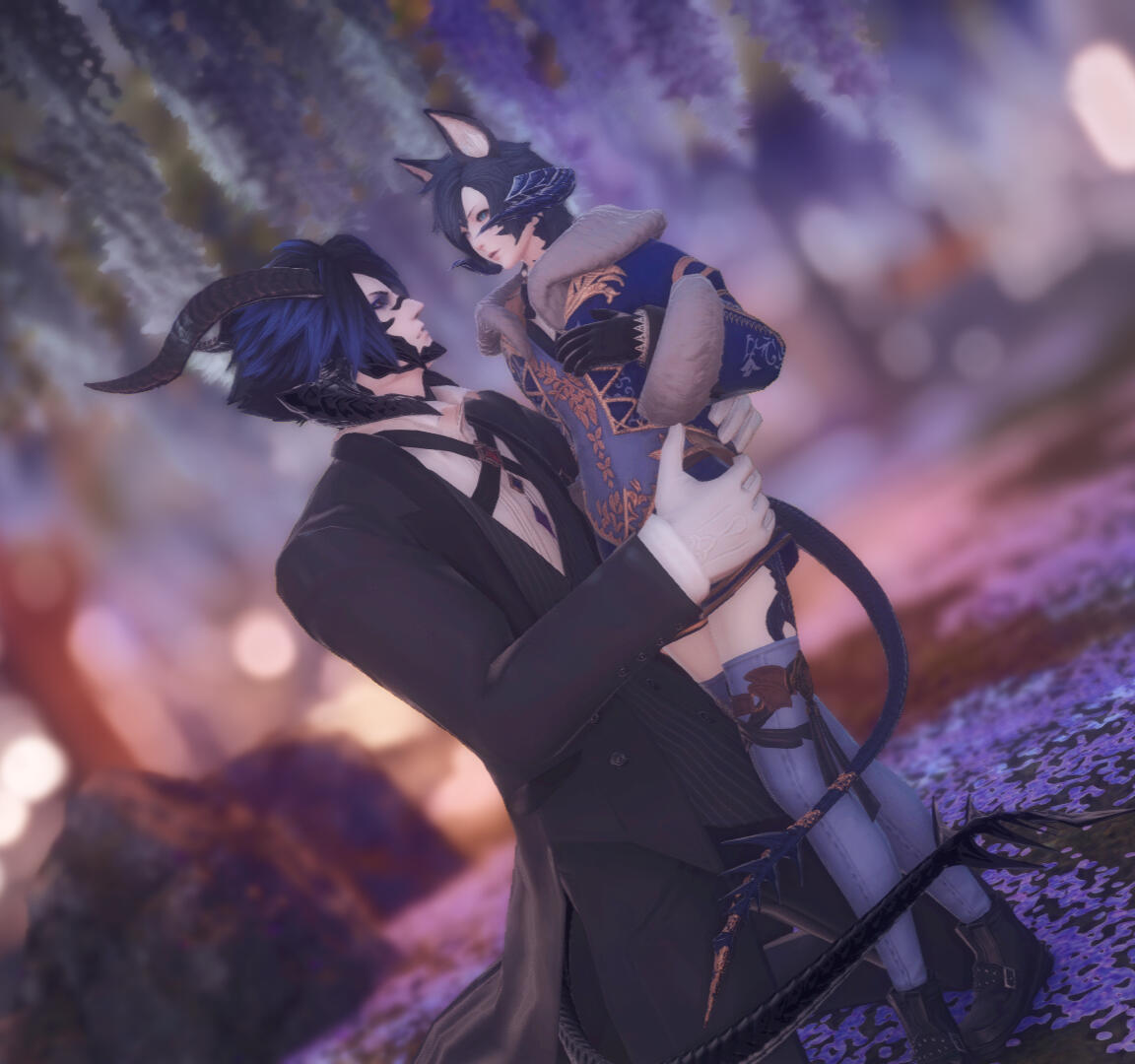 Tabin Himaa's Servant: Andras is almost always found by Tabin's side. Their bloodpact means he must care for and protect Tabin until his revenge is exacted. Only then can Andras drain him entirely of aether, killing the man. Until that day, Andras will only take enough aether to survive, leaving Tabin weakened but alive. The two are nigh on inseparable. To challenge Tabin is to challenge Andras.Incubus: Andras does not immediately turn towards violence to gain what he wants, instead using others' desires against them. This also means he is often flirtatious, forward, and casual about physical intimacy.Summoning: Andras can be found in nearly any tome covering voidsent summoning rituals. The tome will him by name and classify as a second-rung voidsent, highly dangerous. Notes advise not to summon unless one is truly desperate. Andras will attempt to seduce the summoner out of the protective circle before proceeding to kill him/her/them and anyone else in the room. Suggested items for summoning include aether, blood, praise, live victim, or a cat to pet.From the 13th Shard: Andras lived on the 13th Shard as an Elf/Wildwood Elezen (we do not know what that world called that race). Other voidsent may have encountered him in their time as mortals. As Andreas, he travelled from town to town and never settled down with anyone or stayed for long. If anyone grew up in his small, rural town then they would be familiar with villagers' hate towards Andreas. The local high priest even claimed his sins caused the flood of darkness. Looking for a scapegoat, most believed the church.Null & Void: Andras is a proprietor of this denizen full of otherworldly creatures alongside Kayt Shepard. Null & Void is open every Thursday, 8:30pm - 11:30pm EST.

You are about to enter the NSFW Zone.If you are under 18 years old, return to the safety of the landing page by pressing the button below.

READ ME: If you choose to read these then you attest you are 18+ years old and/or agree that I am not responsible for any distress caused. Specific trigger warnings for vore, monster fucking, tentacles, non-con / dub-con, oviposition, and "problematic" kinks in general. Andras is a voidsent and incubus. He is violent. The following headcanons reflect this. 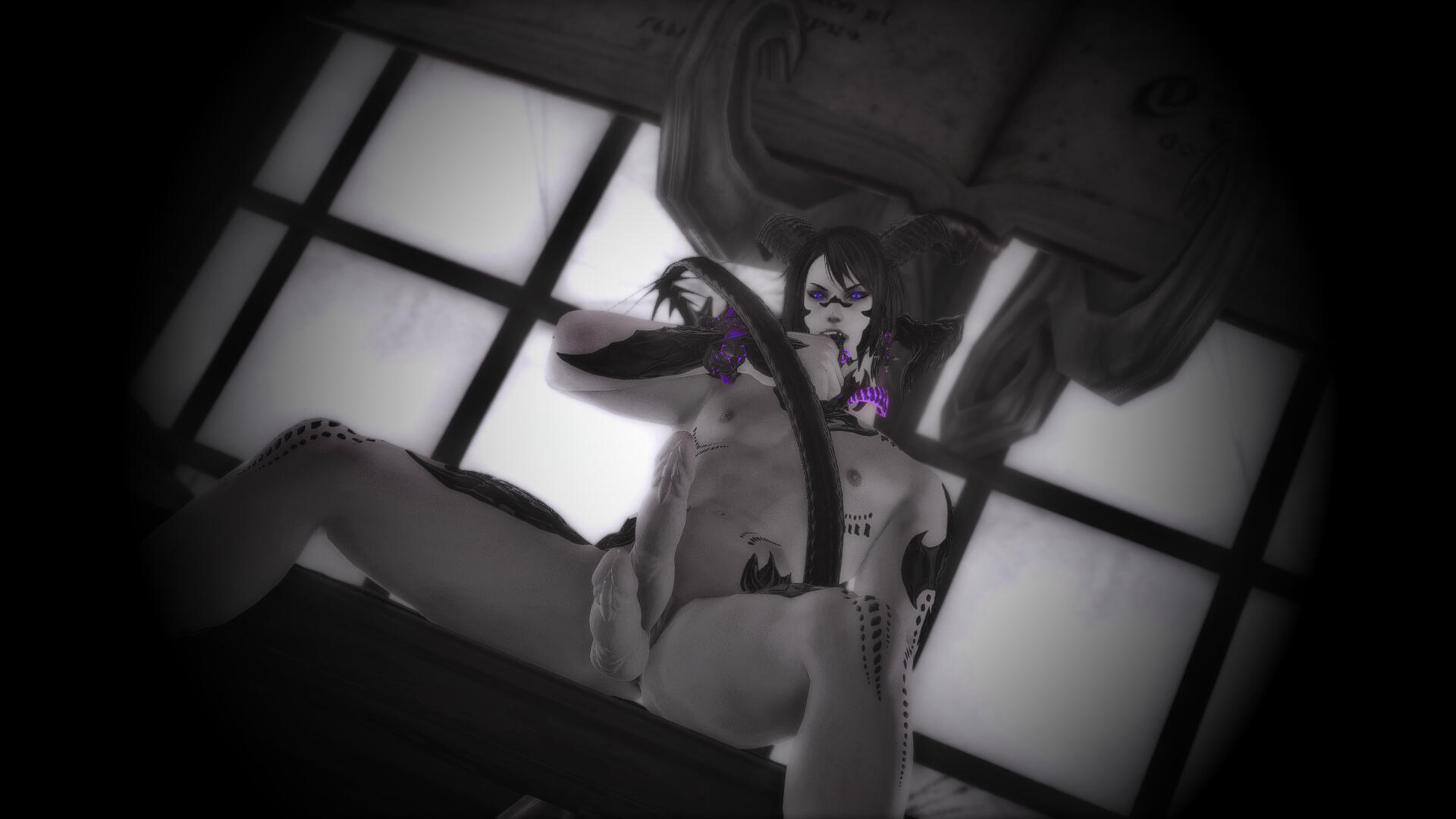 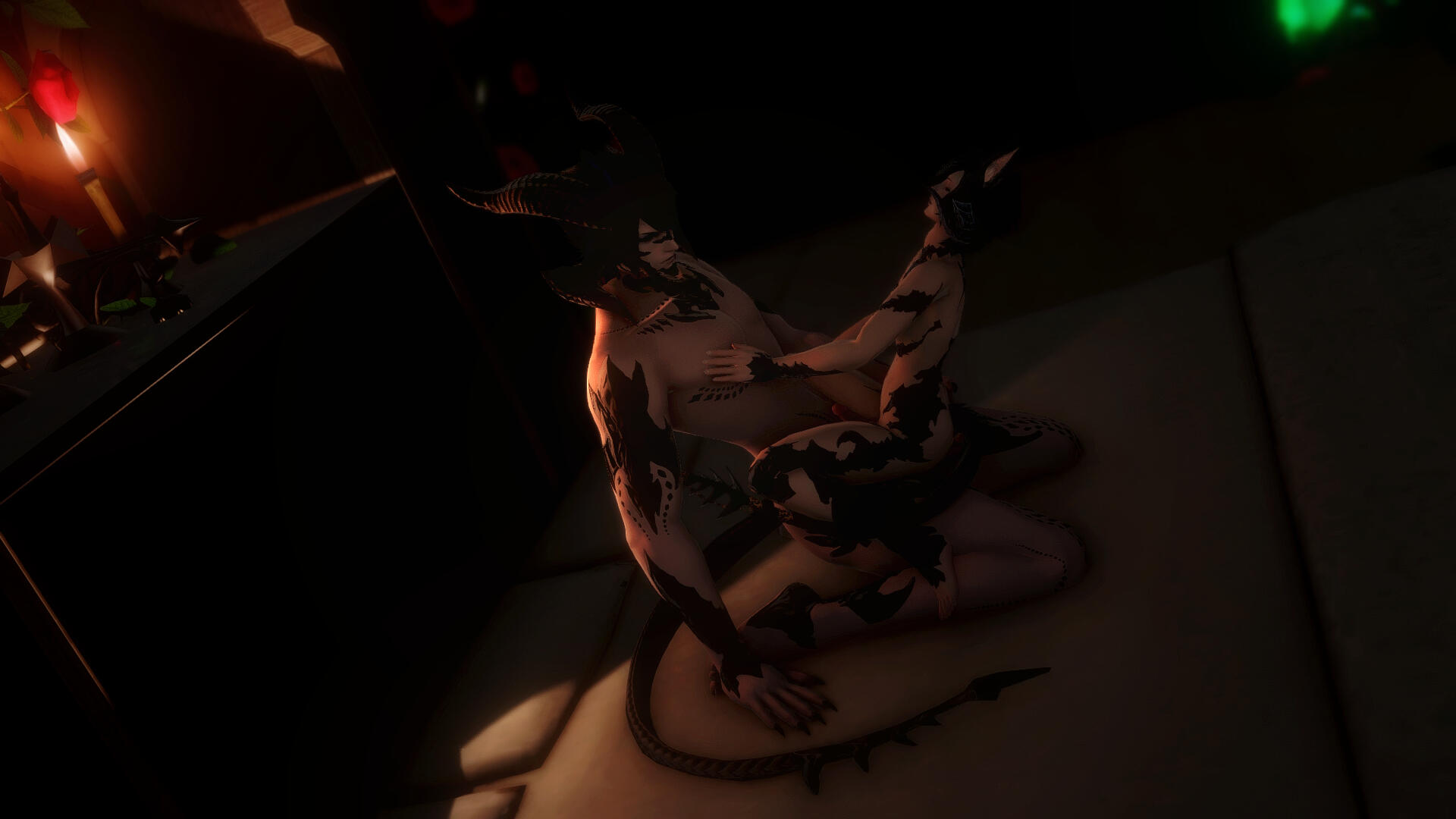 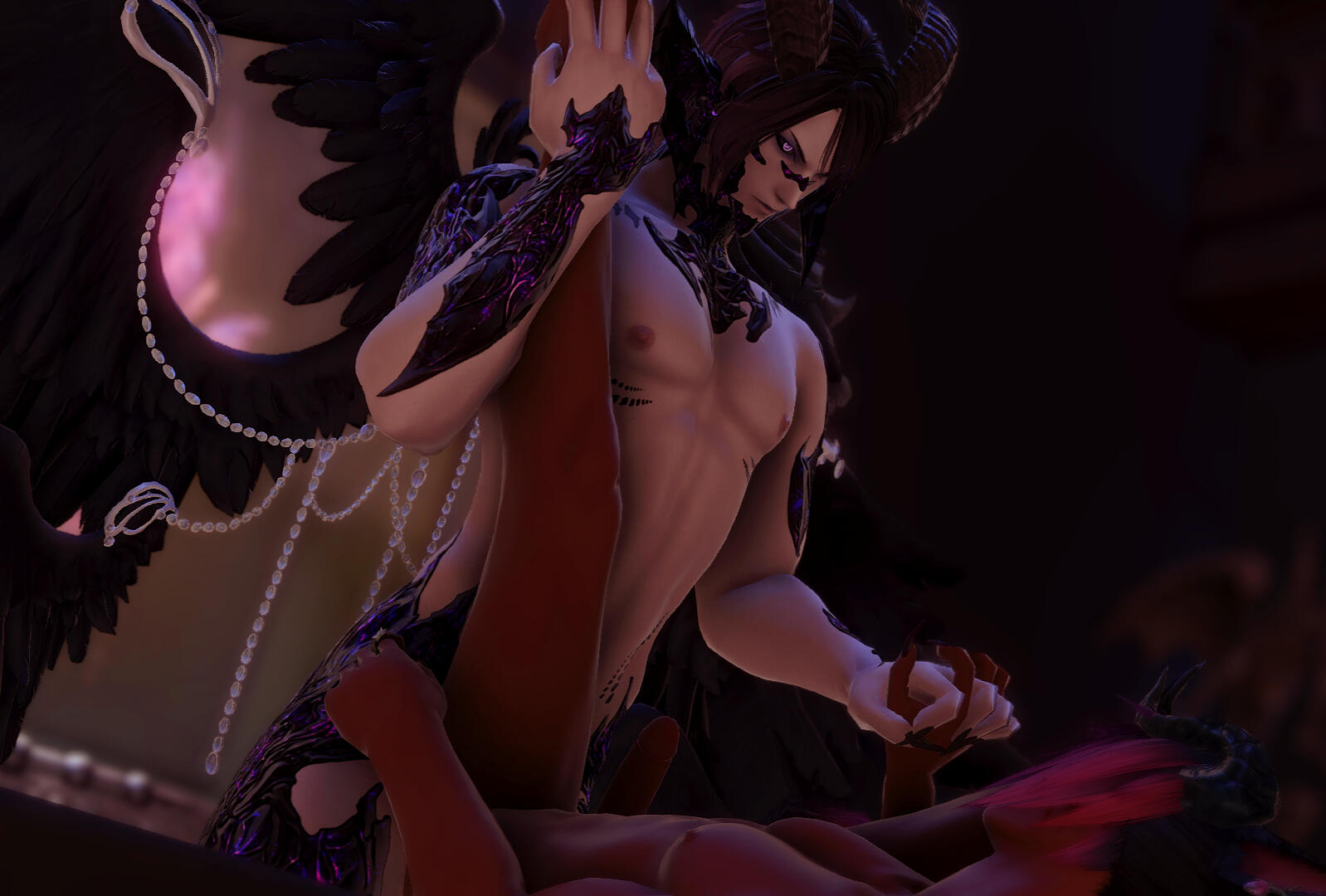 • Open to walk-up RPs or planned RPs!• Schedule varies because of day job, Etsy shop, and other hobbies, but I will communicate if there is a conflict or if I will be offline for a while.• Want to reach out OOC? DM me at ஜ Ⓐⓡⓨⓝ ஜ#8332.• If you are uncomfortable in an RP for ANY reason, PLEASE tell me so we can change/retcon/end the session.• OOC replies are marked with (( )).• I can write detailed paragraphs or short sentences, but this largely depends on whether it's an open RP.• I WILL NOT RP NSFW scenes with minors (under 18 years of age).• Lalafell-friendly! 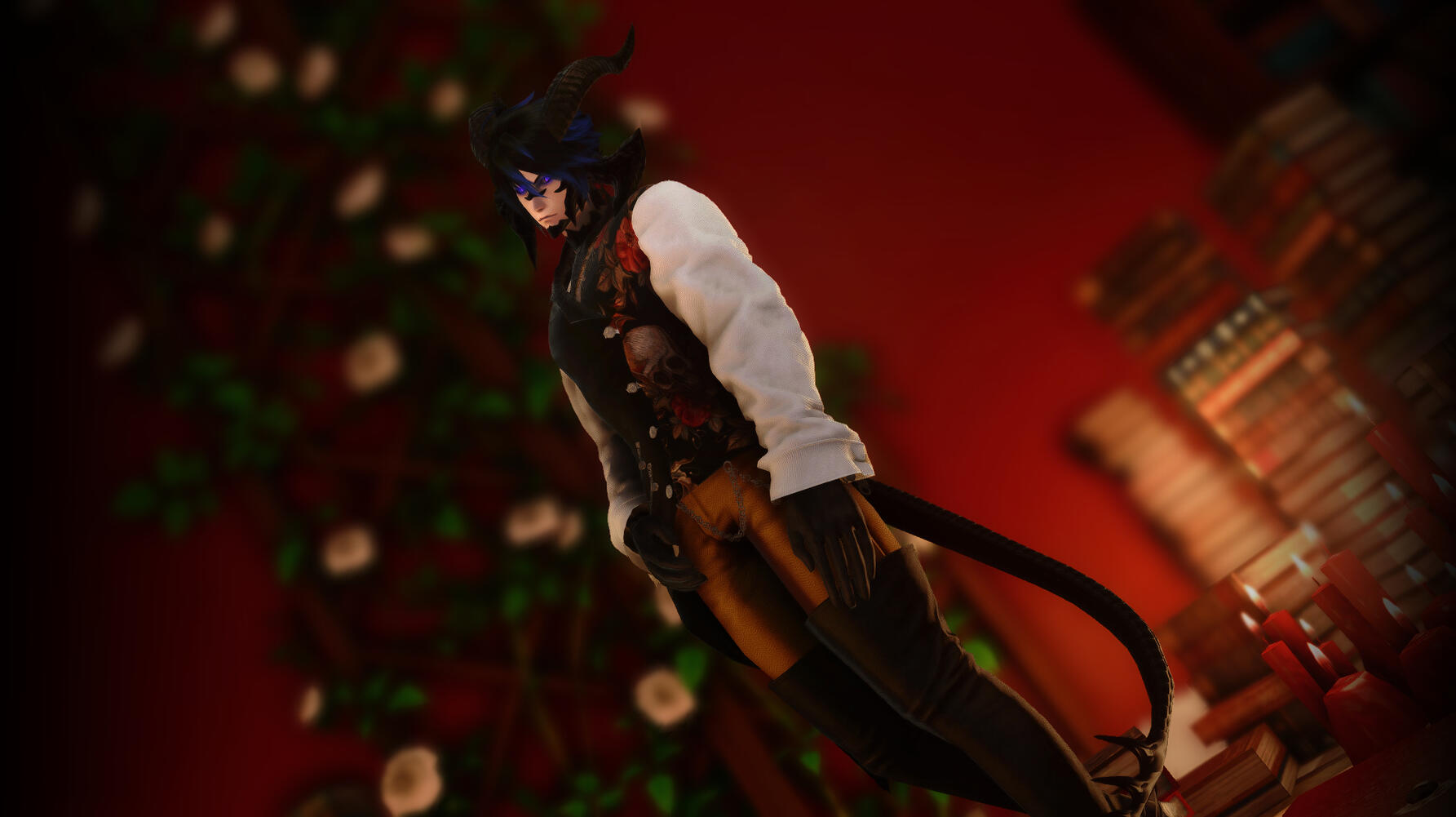 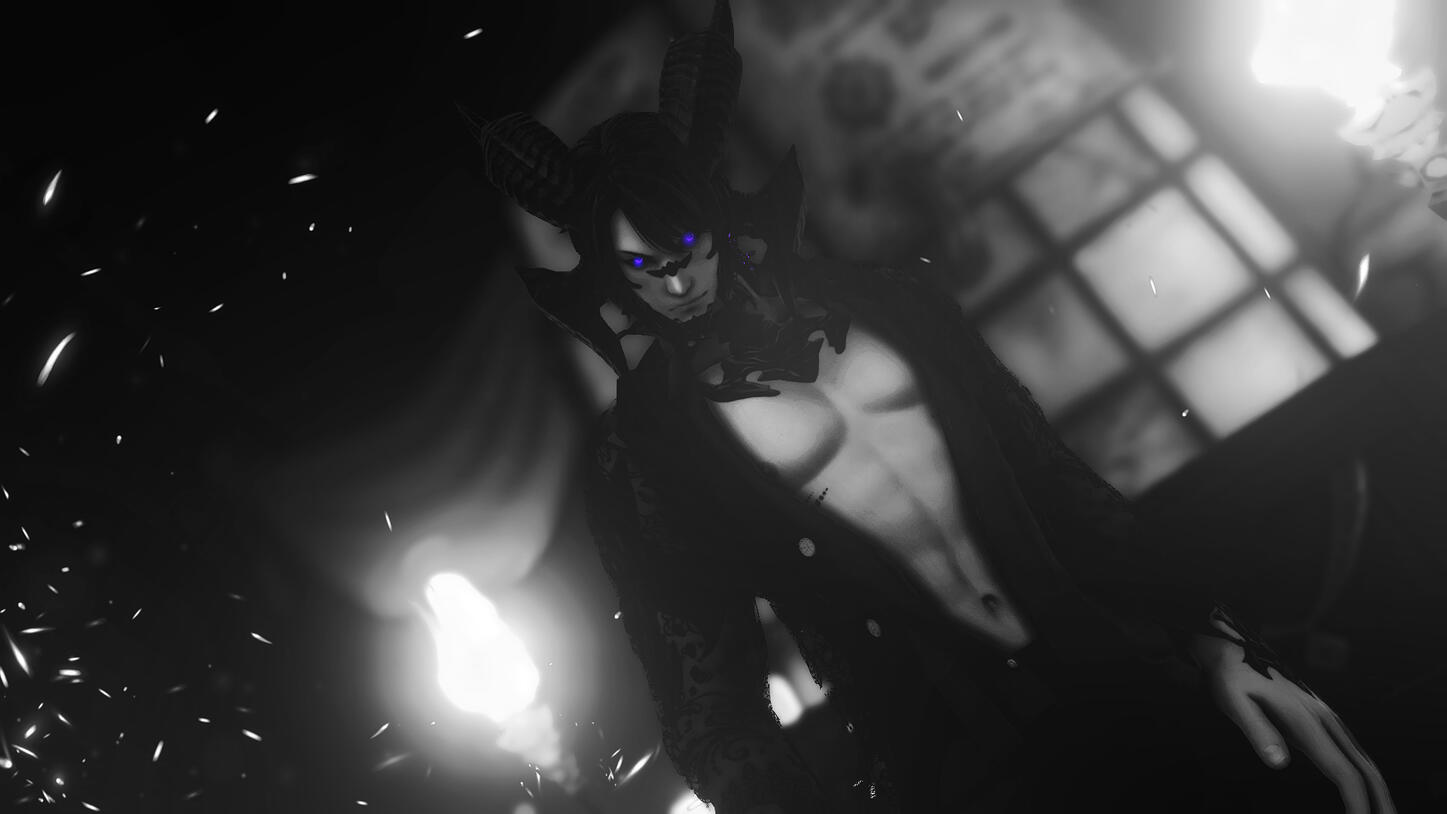 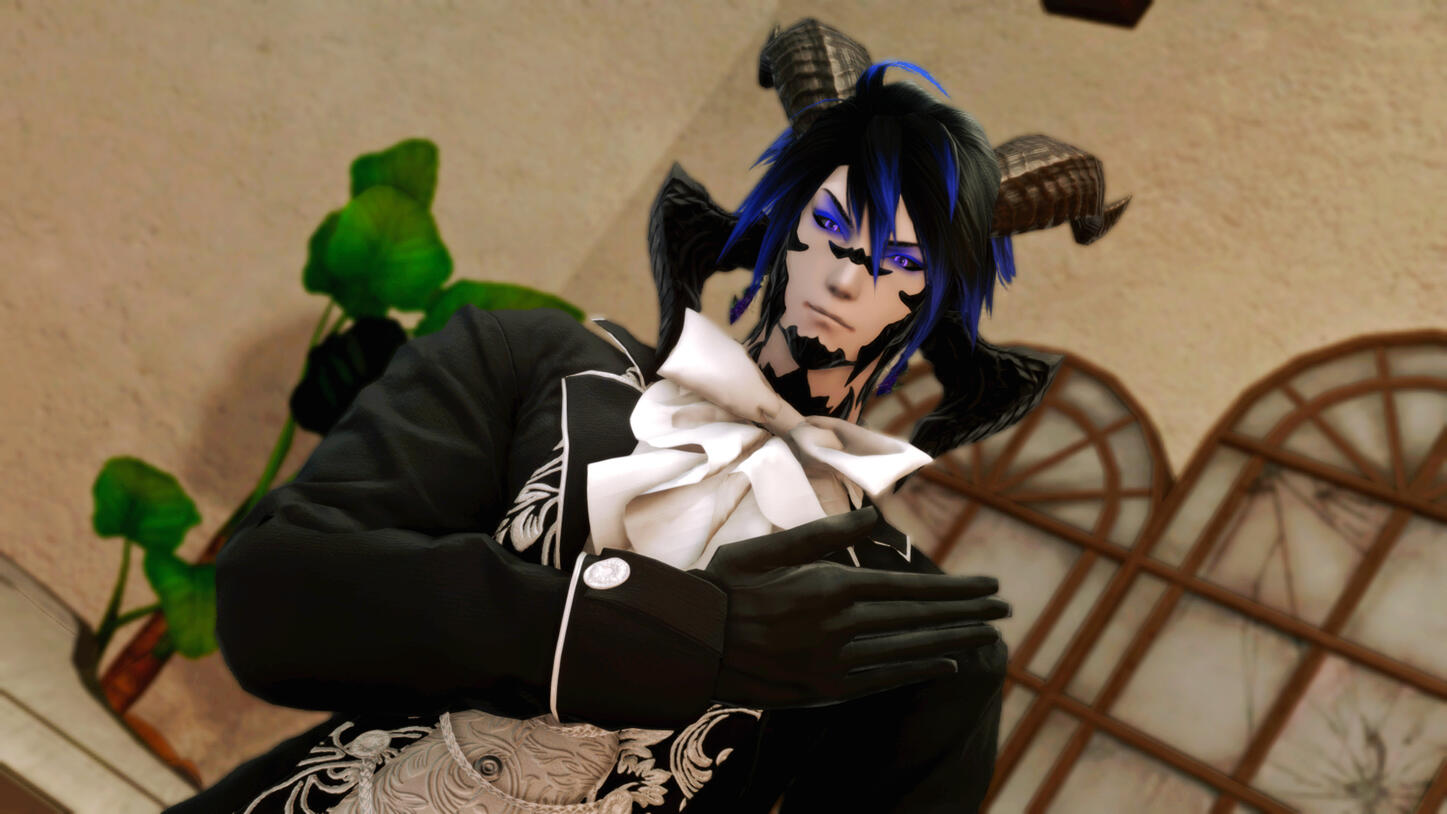 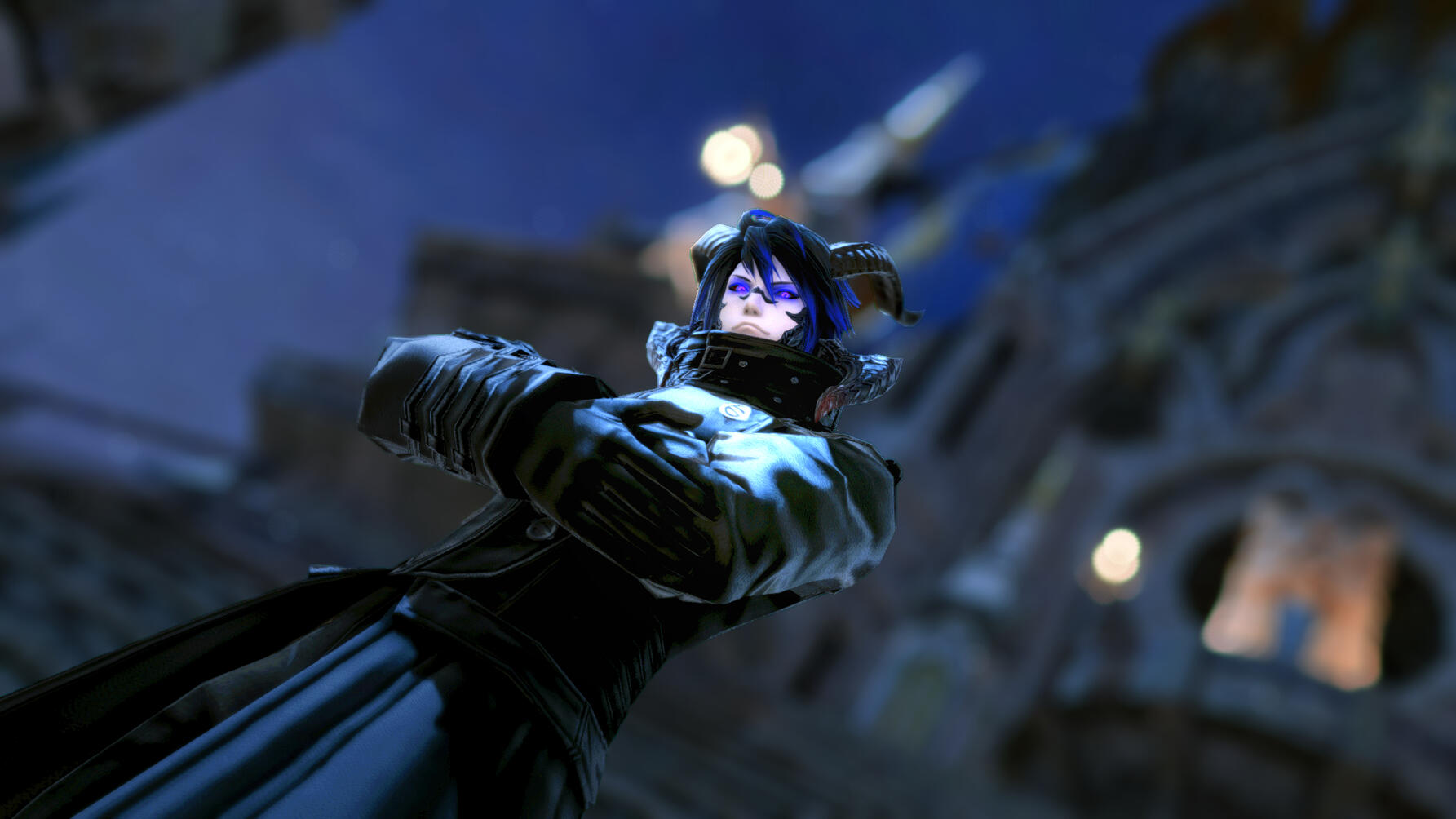